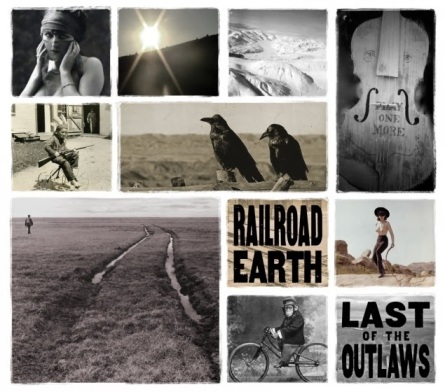 It’s something of a truism that jam bands are more compelling live than they are in the studio – after all, The Grateful Dead made some fine albums, but Deadheads don’t collect hundreds of studio bootlegs. The truism is certainly true of Railroad Earth, whose bluegrass and Celtic folk influences otherwise set them well apart from their peers. I’ve had the opportunity to see them twice, and both times my experience has confirmed that their recorded output, with a handful of exceptions (“Old Man & the Land,” “Been Down This Road”), just doesn’t quite capture the joyous melange of styles and moods and the laid-back-yet-energetic improvisational flair that comes out so potently onstage.

This is still true of the band’s latest outing, Last of the Outlaws (2014), but to a lesser extent than many of their previous albums. This is in part due to the fact that, on said previous albums, songs tended to be more compact, basic themes on which RE would then elaborate onstage. But as mandolin player John Skehan explains in an interview with Glide Magazine: “In contrast to the last studio album, which was very much a production effort where the songs were already kind of done, set, and built from the ground up with drum and bass tracks… Last of the Outlaws… was more of a live setting and vibe.” The resultant music is more akin to the live set Elko than, say, Amen Corner, building expansive jams right into songs like the propulsive “When the Sun Get in Your Blood” or the outlaw compendium “Hangtown Ball.”

That live-in-the-studio aesthetic makes for a lengthy listen–70 minutes and change–that doesn’t always manage to conjure the band’s trademark concert spark: the downbeat title track drags, while “One More Night on the Road” is generic country-rock.  The core of the record, however, is “All That’s Dead May Live Again”/”Face with a Hole,” and it doesn’t just spark – it burns. Incorporating plaintive Irish folk, saxophone-tinged prog, funky rock, and classical dynamics, the band weaves a twenty-minute suite around the movements of the traditional requiem mass, from the “Introit” through the “Dies Irae” into the “In Paradisum.” Railroad Earth are more than open to 15-minute-plus songs, of course. But this is the first time they’ve attempted a deliberately composed work on this scale, and it’s among the most moving things they’ve ever recorded. As great as their jams may be (and there’s plenty of space here for the group to stretch out), I can’t help but hope they do more in this vein in future.

When all is said and done, you still have to see them live to get the full Railroad Earth experience. But after Elko (for my money RE’s definitive recorded statement), Last of the Outlaws is as solid as anything in the band’s catalog. It’ll tide you over until the next gig near you anyway.

This entry was posted in Album Reviews and tagged Albums of 2014, All That's Dead May Live Again, bluegrass, Celtic, Face with a Hole, Hangtown Ball, jam band, Last of the Outlaws, One More Night on the Road, Railroad Earth, When the Sun Gets in Your Blood. Bookmark the permalink.