I wrote yesterday that many of my recent “classic rock” selections for these lists have been at least partially motivated out of relative unfamiliarity with much of what was being made in the 1980s. But after many giants of the Golden Age of Rock & Roll had spent much of that decade in the artistic and commercial wilderness, the late ’80s were a great time for comebacks. That may go some way toward explaining why the following albums are, without exception, by artists who first became active in the 70s or earlier – not because I don’t know anything else from 1989, but because these albums are just really good. But then again, rock has a perhaps unhealthy obsession with youth. The mere fact of an artist being in their 20s (or their 40s, or their 60s) communicates nothing, by itself, about their musical talent – something recognized in other genres (folk, jazz, classical), but which many rock aficionados seem to miss.

After several album-length genre experiments, Spike finds Elvis demonstrating his encyclopedic knowledge of 20th century pop/rock in the space a single record. It was actually Spike that brought me into the Costello fold, due to the presence of two (excellent) Paul McCartney collabs, “Veronica” and “Pads Paws & Claws.” The righteous rage of “Tramp the Dirt Down” got a bit of a bump last year, climbing to #79 in the iTunes charts and showing up in Costello’s Glastonbury set – read the lyrics and it should become obvious why.

To my ears, “You Got It” and “She’s a Mystery to Me” can stand toe-to-toe with any of Roy Orbison’s classic 60s songs. Indeed, the first time I heard the latter, when Roy hits that high note on the chorus, I burst, instantly and involuntarily, into tears. It’s a song made all the more spine-tingling by the fact that, by the time the world had heard it, that voice, one of the most awe-inspiringly beautiful this world has ever heard, a voice laden with heartbreak even as it soars, had left us forever.

…But Seriously can be read as something of a response to critics who lambasted Phil Collins as the reigning king of gooey pop, as the Most Hated Man in Rock beefs up his sound for songs about Apartheid (“Colours”), Northern Ireland (“That’s Just the Way It Is”), and economic inequality (“Heat on the Street,” “Another Day in Paradise”). He’s still more than capable of delivering pop love songs of the highest order, though, as “Something Happened on the Way to Heaven” and “Do You Remember?” attest.  A man of many talents, this Mr. Collins.

Despite the solo credit, Tom Petty’s second-best album (after Damn the Torpedoes) is hardly Heartbreaker-less – Mike Campbell lends his guitar to all of these tracks. But his influence, usually so strongly felt on the Heartbreakers’ albums, pales in comparison to Jeff Lynne’s, who not only co-wrote more than half the album but also produced it, layering the backing vocals as only Jeff Lynne can and spit-shining Petty’s heartland rock into something glossier and more Beatles-esque. Or perhaps more accurately, more Wilburys-esque.

1. FLOWERS IN THE DIRT (Paul McCartney) 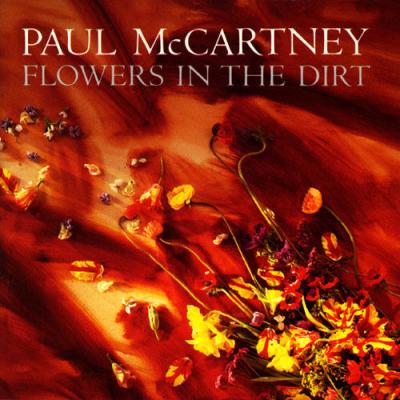 Paul McCartney makes his best work under one of two circumstances: a) when he’s facing personal difficulties, or b) when he has a songwriting partner to fire his musical imagination and engage his competitive spirit. Flowers in the Dirt falls into the latter camp, as Paul’s collaboration with Elvis Costello is his finest, most fruitful partnership since the days of Lennon-McCartney. Even on the songs on which Paul flies solo, there’s a renewed sense of maturity and craftsmanship. Indeed, the only thing that keeps Flowers from being his flat-out best solo album is that it runs out steam in the final stretch – and that, for some inexplicable reason, he didn’t include “Back on My Feet,” “Flying to My Home,” and “Loveliest Thing,” all three of which had to wait for the 1993 McCartney Collection remaster for a proper album release.